Balmos is a strange young boy who appeared on the doorsteps of Konohagakure no Sato, dropped off by a strange, cloaked, red-haired man with a mechanical arm shortly before he vanished into the darkness of the night. He was unconscious on arrival and the only clue as to why he was left there was a note hidden inside the only piece of extra clothing he was accompanied by, his red scarf. The note read "Please watch over Balmos for me... -N.S.", this N.S. presumably being the mysterious figure that he was dropped off by before he vanished like a shadow on a cloudy day.

Balmos' history is currently unknown, with only his appearance in Konohagakure being the most recent event involving him.

During the middle of the night, a strange man with spikey red hair and a mechanical arm waltzed through a strange mist and dropped a strange child off at the guard station near the front gate before vanishing. Upon being dropped off, the boy's body was wrapped in full by the rather large scarf that he was accompanied by. Before any guards could pick the boy up, the scarf seemed to react and try to protect the child briefly before going completely dormant and letting the boy be transferred to the hospital.

In the hospital, Balmos lay unconscious for a day and a half before abruptly jolting up in a daze. The scarf, as if reacting to the boy's reawakening, wrapped itself back around the child and a sudden flurry of freezing temperatures and revealing that he already had an active sharingan before abruptly dying out and leaving a bewildered and vacant looking child just staring at the baffled staff with a tilted head. After a couple questions and brief tests to determine what the boy could and couldn't do in his current situation, a nurse asked him if he knew who this "N.S", or as they knew him now "Nagayori", was and Balmos began to hand the note he was found with to the Nurse...Then it happened. Something had activated the emblem embedded in his hand and instantly froze the note so far below zero that it shattered just from the boy recoiling from noticing what had happened. Before the child could accidentally cause more damage, his scarf grabbed his wrist and waited for him to calm down and the emblem to deactivate before taking over.

The scarf had revealed itself as highly sentient, able to form words in it's fabric to respond to the nurse and elaborate on the boy and anything he couldn't say himself. During the interaction the scarf revealed that it was a separate entity to the boy and acted as a familiar with it's own will, it also elaborated on the mark on Balmos' hand being called the Elderseal which acted as a limiter to hide his full power until he could learn to use it. Balmos himself did not seem to realize the scarf was "alive" and the scarf seemed to want it kept that way for the time being, only forming words briefly out of sight of the boy to inform the nurses of what Balmos could think about but couldn't say due to his mostly mute nature.

After being released from the hospital, the boy wanders Konoha's streets aimlessly, with no objective in mind other than to stay alive and keep himself safe.

After getting caught by some law enforcement for his scarf constantly stealing pocket change from passersby, Balmos was forced to escape via the sewers using his still strange Ice Powers to cover his escape, though this was mostly the scarf's doing. After escaping, Balmos wound up behind a Ramen Stall where several people were just starting to eat. He sat down against a wall and began to contemplate what he needed to do next...only to realize all too soon that his scarf had gone a step further and tried to steal a full bowl of ramen from a woman sitting at the stall. When it came back without the haul Balmos panicked and grabbed the nearest weapon, a pipe, and froze it into an icy staff covered in blue ice. The woman the scarf failed to steal from had followed it back to him, and brought along a friend. A man, scruffy and tired looking, was still eating his ramen even as he showed up to confront the boy. Finally snapping, Balmos let out a surprisingly loud yell that coincided with a burst of Blue Ice Spikes erupting from the ground around him and almost hitting the two people that had just shown up but stopping briefly before they shattered when the boy tried to start breaking them apart, not wanting to actually hurt anyone.

After a brief confrontation and exchange of information, the duo informed Balmos, or rather his Scarf, about the Academy that had been turned into a refuge for orphans and the homeless. Heeding this knowledge, the Scarf coerced the boy into letting it take hold of his body and lead him to the Academy. Upon arrival, the boy was granted a bed and access to the facilities of the Academy that had been set up. After a much needed shower and change of clothing into a pair of baggy pants and a long-sleeved white shirt the boy had regained his composure (having thrown himself into a state of dormancy after the uncontrolled Ice powers he'd expended in the alleyway) and was able to explore on his own as the scarf acted as the third arm in their predicament for now. Following the instructions of the teacher who had brought them in, the boy made his way to the cafeteria to finally get something decent in his growling stomach.

Balmos appears to be around 11 or 12 years old, with his "on-the-record" age being 11, standing around average height for an 11 year old. His hair is a dark blue color and his eyes are always in a state of Sharingan with skin of a light peach color and a single scar on the left corner of his mouth. Around his eyes seems to be irremovable makeup that gives him a snake-like appearance. He usually wears a loose set of dark, pale red cargo capris along with a brown, long-sleeved jacket with the sleeves loosely rolled up to his elbows. For shoes, he wears some worn-out black boots with odd magenta soles always loosely tied. He also wears a pale red scarf around his neck every day since he was found outside Konohagakure no Sato, it seems to be a bit too sentient for it's own good. Balmos also has a strange, sun-shaped tribal tattoo embedded in his left palm known as the Elderseal, this symbol seems to serve as a limiter for the boy's latent Ice Powers.

Balmos is a rather quiet child, with a blank expression on his face most of the time leading many to call him an airhead. He was though to be mute at first but it was later discovered the child could form broken words on his own but instead allowed the scarf to speak for him most of the time. He's still socially awkward and tends to sit alone whenever in an area where he could feasibly do that. 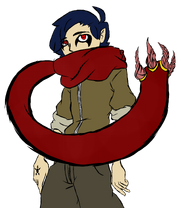