CJ is around 190 cm in height. His hair is a snowy white and his eyes are a deep crimson red. Somewhat careless with his appearance he can usually be seen wearing a tan, hooded jacket with no shirt underneath in combination with pants and boots on some level of the brown scale of color and modified for life in the desert. The legs of his pants and the inside of his jacket are further modified to hold scrolls he takes into battle. On the outer side of each pant leg are 5 pockets (totaling 10) designed to carry scrolls and three loops inside the back of his jacket for the same purpose.

Alternate Attire: Shadowed within the confines of the blue Kazekage robes and hat.

Hardened since the last great war that crossed the Shinobi world. Though rare, around old friends he is known to crack a charming smile, laugh, and have a brief good time before the duties of his office take hold once more.

CJ was born to a tribe of traveling nomads that lived in the desert outside of Sunagakure. Before CJ turned three years old a band of passing bandits slaughtered the tribe, only leaving the young boy alive to retreat from a coming sand storm. A group of patrolling Suna nin found the destroyed campsite the next day, and the boy in the sand covered tent.

CJ was taken back to the village and put in the orphanage. He was a quiet, troubled child and didn't get looked at by many families, and ran off most that gave him a chance. When he was about 6, he got his first glimpse of a powerful sand shinobi that could move the desert itself. Something inside him stirred and he decided what he wanted to be. He repeatedly snuck out of the orphanage to visit the academy to watch the students there and sit in on classes. After several reprimands for his behavior, the woman in charge of the orphanage spoke with the academy and made an arrangement to enroll the young boy.

As a student in the Academy, CJ developed quickly. He had no family no care for, no strict "friends". He soaked up knowledge like a sponge and idolized the sand nin and his siblings. He quickly reached the rank of Genin, and Chuunin, before mysteriously breaking away from the village.

He spent his early teen years traveling the desert, has his parents once had. He worked excessively to perfect suna ninjutsu, incorporating futon and puppeteering into his technique. He disliked the disadvantage of having to be in one place while using his sand techniques, so he worked his body, getting faster, stronger, so that he could out maneuver the enemy when he had to. He learned enough about genjutsu to be able to tell when he was under it, and how to break it.

He came to know the shifting dunes of the sand sea well, learning about the creatures and plants in it and how to live with them. He formed summoning contracts with the scorpions, and there are long buried secrets under the sand that he and he alone knows about.

As an ANBU he was implanted with the Ichibi bijuu, and given a medical-nin to watch over him in this time of balance. Growing accustomed to the new presence within his body, while delving into the hidden organizations of the Wind Country. The bijuu has since passed on to other hands.

During the middle of the war, CJ seemed to disappear as the village was surrounded. Though he seemed to abandon it as a lost cause, rumors started to circle about a great demon in the deserts of Wind Country, as whole platoons of the opposing army vanished in sudden, irate sand storms that would rise at a moment's notice.

Returning after the demise of the war, CJ found the Nidaime Kazekage, Kayenta Moenkopi, to be much quieter than usual and not her normal self. One day, desiring a break from the shinobi life in her own words she appointed him the new Kazekage. It has been more than two years since then, as he settles himself into the role of leading and guiding the sand while manifesting his own strength should Amakusa's forces rise again. Later the Nidaime became active once more before handing down the robes to the Yondaime Kazekage, Raijin Hikari.

Philosophy:
Never again will one rise to power above all others, and the way of shinobi shall live on. The sand will not fall. 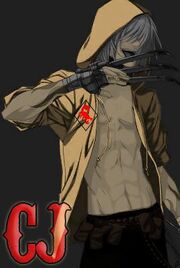