Chio was born in The Land of Vegetables. He and his little sister, Mizuho were raised there by their mother. Here, Chio learned how to use his "Kekkei Genkai" of Hana Ninpō. While he refers to it as a Kekkei Genkai it actually isn't one, but is in fact a Hiden technique, Chio simply isn't aware of that at the moment and still believes it to be a Kekkei Genkai. Chio lived a happy life here, until one day he became mad at his mom. Being at the rebellious age of 15, he ran away from home, leaving Mizuho and his mother in the Land of Vegetables.

He ran away and spent some time in Konoha before deciding that Konoha wasn't the place to stay. He wandered around for a bit until he stumbled upon the Village of Amegakure. There, he found out that Styx, the Third Amekage is his brother. It was then that he also found out who his father is: Uchiha Kamui.

He lived in Amegakure for a while, but that would soon change. Styx headed out to Kusagakure to teach someone Paper Ninjutsu. Styx had also promised to teach Chio the same techniques, so Chio followed his brother to the Village Hidden in Grass to learn Kami along with the Amekage's newest student.

It turns out, that the person who Styx was teaching was none other than Mizuho. The brother and sister were reunited after two years, with Chio bringing more familiy members to Mizuho. It was then that Chio discovered that his mother had died two years ago, shortly after his leave. Even though it was saddening news, it was overshadowed by the joy of rediscovering his sister again and finding out that she was in fact, pregnant.

Chio decided to stay in Kusa so he could remain close to Mizuho and her new son. He originally received a chuunin rank in the village, and retested later to become a jounin.

He ended up going on a mission to The Land of Waves, along with his sister Mizuho. During the mission he ended up unlocking his Sharingan. Which he has now taken to having active the majority of the time. After the mission he was promoted to the rank of Jounin Commander. After a spar with one of Kusagakure's Shugosha, Chio himself ended up being promoted up to the rank of Shugosha. Taking the last open spot on the Kusakage's personal squad.

While in Kusagakure Chio was given a squad of genin to train. While they were classified as genin they were all close to the same age as Chio, most of them only needed a slight push in order to be ready for a Chuunin position. The three genin were named Himawari, Miyako and Kenzo, the group didn't last long after a lack of missions for them to go one and the disappearance of one of the members. But the squad would still be a blessing to Chio, meeting the love of his life all over again in Himawari. The two dated for a bit before realizing they were right for each other and becoming engaged. While this was Chio's second Fiancée, the first one passing away in the middle of the night next to him, which in turn unlocked his Mangeyko Sharingan, Chio grew closer to Himawari than he ever thought would be possible with a person.

Chio once had the Reibi given to him by Tsuyo, Which was sealed inside of the boy with the four symbols seal. Tsuyo also kept a small remnant of the Reibi with him. Having the Reibi inside of him granted chio the ability to "exchange" his chakra to the Reibi for its own Dark Chakra. Giving Chio the ability to use the Body Revival technique and use the Dark Chakra to strengthen his own techniques. As well as to use the Reibi's shadow arms and negative emotion sensing. Chio ended up giving the reibi to someone in exchange for a specific jutsu and a new sword. Since he actually had the Reibi sealed inside of him for a decent amount of time before getting rid of it Chio was able to master its power. Which allowed him to continue use Dark Release.

Chio ended up participating in a fight with someone from Uzushiogakure, Chio almost ended up dying during the fight. Almost dying but not dying just yet. After he had re-woken he discovered that he had been taken to Uzushiogakure, specifically to someones home, and that his normal EMS had been replaced now with the Rinnegan, the near death experience triggering the eye's activation. But almost immediately after that the man whose home Chio was taken too would end up killing the boy, snapping his neck. It wouldn't take too long before Chio was brought back to life though, his body being sent in a body bag to Amegakure where the boy's brother Styx would revive him through the Rinnegan's Naraka path abilities.

Once Chio had returned to Kusagakure he'd end up finding out that his wife had been having an affair, with his own brother none the less and that she was leaving him and taking their kids to be with his brother in Amegakure. Their leaving being something that pretty much destroyed Chio, especially in the way they left. He ended up locking himself inside of his house for literal months, only leaving it to train as he tried to preserve his sanity thanks to the Uchiha's whole Curse of Hatred deal. While hiding himself from the world Chio would go through a number of changes due to him viewing the world entirely different, his appearance changing as well to sort of reflect his mental changes.

Chio has naturally black hair and emerald green eyes when he doesn't have atleast his three tomed Sharingan activated. He normally wears some black body armor, similar to what an ANBU would wear, the only change being the Uchicha clan's symbol that Chio carved into the back of the armor. He also wears black arm protectors that match the style of armor the boy's began wearing, with a pair of black pants. Underneath his armor is usually a plain grey shirt, the sleeves for said shirt extending about half way down the length of his arms. He normally wears a weapon holster on his back to carry around his Gunbai, and a smaller holster on each leg, both holding a fuuma Shuriken, some Chakra sealing tags and some chakra pills. Aside from his normal clothes Chio now wears a plain white Mokuton mask that he keeps strapped to the back of his head, the mask being completely plain and bland while on the back of his hand but when placed on his face Chio manipulates the mokuton in the mask to make it take on different shapes. Such as a Shinigami mask and a Jester's mask. The boy's right arm is also now completely covered in thick white bandages that extend from his shoulder all the way down to his fingers, the bandages currently hiding the pair of sharingan he had implanted into his arm. Chio usually keeps his Kusagakure fore head protector either wrapped around his left thigh or wrapped around his neck. 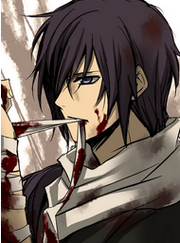