After receiving the Dragon Blade from a confidant, Rusaku decided to reforge the weapon to fit his aesthetic tastes. The length of the original tool was not to his liking, so he melted down the metals and shaped it to be longer, using Kaguya bone to fill the gaps in material. All abilities of the sword remain the same, the only difference is in the length, and it’s appearance.

The Dragon blade shares a great number of similarities to Samehada, in that it remains partial to its current owner, but lacks the conventional sentience that the Shark skin has. It also shares the ability to absorb chakra with each swing, but on a lesser scale. While Samehada can absorb the equivalent of 4 tails of Biju chakra per swing, the Dragon Blade can only absorb two.

Despite lacking the absorption potency of the Shark skin, the Dragon Blade makes up for it with it’s own unique ability. Utilizing 5 different colored orbs, the user is able to plant one of them into the blades hilt, and utilize the nature element that corresponds with its color, performing whatever jutsu the user wishes through it.

While not actually having a measurable chakra cost to wield, the user must have a considerable level of chakra in order for the Dragon Blade to obey without consequence. For Rusaku, his status as both an Otsutsuki and transmigrant for Hamura’s son, garnered him a large enough chakra pool to wield the weapon effectively. Others may need outside sources such as a Bijuu or Jiongu to properly utilize it.

I literally just didn’t like how the sword looked, so I made this page. If someone gets the weapon from me, they can revert it back to the original state. All abilities remain true to the original weapon, only with scaling and measurement that applies to the game of SL. 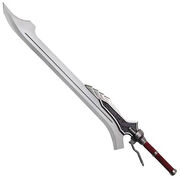