Gaiaku Uchiha (うちは害悪, Uchiha Gaiaku) was an S-ranked shinobi who had become renown for possessing the genetic powers of both the Kaguya Clan and the Yuki Clan. He served as the Commander-General of Konohagakure's ANBU regime.

Born of an Uchiha-Senju-heritage father and a mother hailing from Kirigakure of a mixed bloodline - Kaguya and Yuki, and raised in Konohagakure's Uchiha Clan in spite of his additional Senju lineage, Gaiaku was well taught to hone his prowess in Fire-styled ninjutsu, and after having activated his Sharingan at some unknown point was trained to be physically fit to manipulate its associated buffs to his fullest advantage. Not only this, but he realized his ability to manipulate his skeletal structure, and hence was greatly praised in the taijutsu-field. He continued this training until the age of 7, when his parents entered him into the local academy, of which he graduated a year following his enrollment. Some time after this, he discovered his ability to transform water into ice.

He was placed into an unknown squad, and completed a number of fairly difficult missions due to his skills as a shinobi and as the village was in distress due to war. At the age of 10 he passed the Chūnin exams, and the following year became a Jōnin. He then murdered his best friend, having learnt about the Mangekyō Sharingan, and heightened his prowess by a wide gap; following the aftermath he became a leading figure within the Uchiha Clan, having evolved his Sharingan at such a young age. He also began to conduct a mass of experiments to further improve on his abilities and to transplant the DNA of his fallen foes, and eventually even that of the long-since-deceased into his own.

Many years later he made his return to the limelight as a member of the Akatsuki, although many of his predecessors were left to wonder at how he joined up with the organization when possessing such power as he had in the past. The answer even to this day remains unclear.

Whilst a member of Akatsuki, Gaiaku's body was experimented on by Montoro, of whom managed to heighten the element-manipulating abilities of the Uchiha, greatly improving his own mastery over Ice Release and Shikotsumyaku.

Some time throughout the duration of his presence in Akatsuki, Gaiaku battled with Kakashi in a frozen ice-field and unlocked all forms of Susanoo, starting from its larvae state of a skeletal embodiment to gaining muscles and skin. He then warped Kakashi and himself to a deserted down of ancient origin and further developed Susanoo to wear a layer of armour, causing it to physically resemble a yamabushi, and also founded Tyrfing. In the aftermath Gaiaku obtained Kakashi's Sharingan [eyes], in turn gaining the ultimate power of the Uchiha.

Following the mysterious death of his partner, Kakashi, Gaiaku had been partnered up with the shinobi known as Siegfried; it was a known fact however that the two coincidentally got on quite well with one another.

When the Akatsuki was disbanded by its founder, Gaiaku rejoined the latter when Genesis was established. He had been considerably inactive in movement, only creating several ice swallow familiars to scour the skies of Konohagakure as to observe the events below from a remote location. In addition to this Gaiaku had also on behalf of his superior, formed the alliance between the organization and Iwagakure. At some point during his membership, Gaiaku had partially acquired the powers of the Rinnegan.

Following the appointment of Yūmei Kokūzō as the Firth Hokage, Gaiaku was appointed as the head of the local ANBU division. Several days later Yūmei sealed within him the bijū, the Ichibi no Shukaku, granting him the ability to freely manipulate sand, a significant portion of which was stored within a gourd for easy accessibility.

Spending consecutive months in seclusion, Gaiaku mastered both Ice Release and his ability to manipulate sand. His appearance and personality had also changed by this point, where his sadistic self, off which was previously forced to surface due to the Shukaku's influence, had vanished completely, then displaying a rare elegance found only in a few who remained on the continent at the time. Some number of months later, Shukaku was removed from Gaiaku.

Gaiaku later perished during one of Genesis' early campaigns, though not first without imparting everything he knew to Avalon Lucetius.

As a member of the Uchiha Clan, Gaiaku possessed the powerful Kekkei Genkai known as the Sharingan, as well as its evolved form, the Mangekyō Sharingan. From implanting Kakashi's eyes into his own eye-sockets he had obtained the ultimate power known to the Uchiha, the "Eternal" Mangekyō Sharingan (永遠の万華鏡写輪眼, Eien no Mangekyō Sharingan). He had also unlocked all transformations of Susanoo, his own being an exact replica of Itachi Uchiha's, where it wields both the Yata Mirror and Tyrfing, it's physical appearance resembling a yamabushi.

Inheriting the mixed bloodline of his mother, Gaiaku was also in possession of an additional two kekkei genkai: Shikotsumyaku and Hyōton. Possessing an expansive chakra pool and battle knowledge worthy of merit, his experience and current standing in the ninja world had led him to be dubbed a figure better left alone. His usage of the Shikotsumyaku had greatly improved over the years, he also possesses many Hyōton techniques in his arsenal, each one serving a more practical purpose than the next. He had trained up to the point where he could utilize most of the techniques in his Hyōton arsenal without the need for hand seals, his shape transformation prowess being particularly high, courtesy of his intensive training as well as the experiments performed on him by Montoro.

The Mangekyō Sharingan had granted him three techniques: the ability to form inextinguishable black flames in an instant from nothingness (left eye), the ability to entrap opponents in a powerful genjutsu (right eye) and the ability to summon an ethereal avatar (both eyes). Through collaborating the abilities of his left eye and both simultaneously, he had been granted access to Blaze Release.

As the previous host of Shukaku, Gaiaku possesses the ability to manipulate sand, typically moving it through the air to serve various purposes. Being a jinchūriki, Gaiaku had huge levels of chakra and thus was able to use many chakra-taxing sand-based techniques, sometimes in quick succession, before becoming exhausted. The amount of sand he could control at one time was immense: he could use a massive amount of sand to fully transform into the One-Tailed Shukaku, as well as create a tsunami of sand. If sand was lacking in abundance, Gaiaku could break down the earth minerals in the ground to create more sand. While he could control any dry sand, ordinary sand requires more chakra to manipulate, meaning he cannot control great hosts of sand for prolonged periods of time. As a result, Gaiaku keeps his own chakra-infused sand with him at all times, in a calabash gourd also made out of sand on his back. Because this sand was already infused with his chakra, Gaiaku had a great deal more control over it, enabling stronger and faster attacks with it.

A veteran of the battlefield and once a leading figure of the Uchiha Clan, Gaiaku was very much a reserved individual, only speaking when necessary and when a conversation was initiated by another. He previously appeared to be sarcastic at times, although it had been shown that this attitude of his was augmented to provoke his enemies into a rage which would later result in their deaths. He introduces poetic elegance to the antagonist role and his speech patterns are highly metaphorical and somewhat jovial. His refined nature stands in stark contrast to his role as a sadistic war-bringer. This juxtaposition was characteristic of villains in fiction, particularly the evil genius archetype. He had a narcissistic and sophisticated personality, friendliness and a relaxed nature. He possesses a seeming sense of luxury, evident as when he creates structures of a rare and exquisite grandeur, such as ice palaces, simply to relax for several hours.

Furthermore, Gaiaku's usual calm and goal-oriented demeanor belies a fierce savagery. Despite possessing equal footing with the latter, Gaiaku had a tendency to allow his partner to awaken the battle-starving persona he inherited from his mother's side, the Kaguya clan renown for their reckless behavior and war-favoritism.

Gaiaku had an impressive level of intelligence; he was exceedingly sharp and observant to any situation at hand, as he was rarely surprised or caught off guard. He also displays great intuition, as he was almost never deceived and even then almost instantly realised the truth in any one situation. This intelligence could also be seen through his immense foresight.

In the past, Gaiaku had spiky black hair which extended down below his waist and onyx eyes. He wore red metal armour over a black jumpsuit as both his casual and battle attire.

When he was a member of Akatsuki he wore its standard regalia - a traditional forehead protector with the symbol of the Leaf imbued in its centre, a black cloak that bears red clouds with its interior was red in color. The cloak was knee length and had a high collar, underneath it his casual gear was worn. He also had long spiky black hair and onyx eyes and wore red metal armour over a black jumpsuit as both his casual and battle attire.

In his new attire, Gaiaku presents himself as a much more intimidating figure, whilst further distancing his appearance apart from the majority of other Uchiha who garb themselves in his previous attire. He wears a thick, white-fur cloak extending down to his feet on his back emblazoned with exotic emblems, and wears ebony-plated armor underneath with its collar extending up to the area beneath his jaw, with white cloth lined over the sides of his pant-legs strapped by dual-crossing belts. His hair was notably shorter than what it was previously, his face in a similar sense, somewhat more masculine. His skin was significantly paler in comparison to not only his previous appearance, but that of other humans. Due to having exceedingly-attuned himself with Ice Release, he was unable to maintain a healthy, cream-colored skin texture, instead granting him a much more ghastly-appearance, akin to the dead.

When in Level 2 Cursed Seal form, Gaiaku's hair grows longer, remaining black, his skin becaming a dark shade of grey, his irides turn azure (except when using the Sharingan), shards of ice form along his face, and he develops several horns, large webbed hand-shaped wings on his back that give him the ability to fly and hover and a thin, black tail resembling that of a demon which he could use to constrict or pierce nearby foes. In this form, not only are his physical attributes further increased, but his techniques are also enhanced by the cursed seal's chakra, especially those derived from Ice Release. Having full control over it, Gaiaku could even access its power without fully activating it as well as performing partial transformations at will. 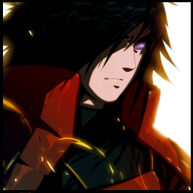 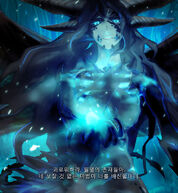 Gaiaku in the second level of his cursed seal.

Gaiaku concept art.
Add a photo to this gallery

Retrieved from "https://narutoprofile.fandom.com/wiki/Gaiaku_Uchiha?oldid=23702"
Community content is available under CC-BY-SA unless otherwise noted.