Gen'ei (幻影, Shadowy Apparition) are essentially beast-like creatures birthed by the shadows which engulf Angra Mainyu's body in the world's evil, metaphorically speaking. In spite of this they all originate from a central location and entity open to modification, disclosed only to Angra Mainyu. They are physically capable of defeating close-range fighters due to their agile and relentless fighting style, however they lack the mentality to think situations over and lunge at their foes regardless possibly being disadvantaged. Equipped with sharp claws they are not to be trifled with, especially when they can tear open one's chest without any difficulty. 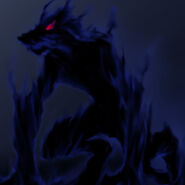 The 999th Gen'ei
Add a photo to this gallery

Despite being Shadowy Apparitions, they do not possess a weakness to light, however unless they've been birthed directly from the avatar-state of Angra Mainyu or battle in an area where only darkness resides, they are quite easy to defeat. They possess the ability to split when struck, and possess shared vision with him. They're modified to corrupt any shadow control and sealing abilities used on them, where when a shadow snares them, they'll merge with it either to grow dramatically in size and power, or spawn more offshoots to ambush the controller. Seals are shattered in a motion where the formation is cracked before entirely dissipating; the effect to which this is realized is determined by the strength and intricacy of the seal, as well as the number of Gen'ei and their distance to Angra Mainyu. Generally it would be simple to seal them while they are distant from their summoner, though sealing packs of them can massively deteriorate the seal's potency rendering it to coming close to, if not entirely destroying it. Angra Mainyu's presence nearby rapidly accelerates this effect, making maintaining a fair distance a top priority. The generic forms of Gen'ei regardless of their ability to split, can be removed from the field via nuke-esque abilities such as Kirin, where not even a trace of them would remain to divide afterwards.

At any time though is Angra Mainyu capable of unsummoning the creatures in droves regardless of distance, as well as severing their ties to the central entity at a moment's notice, terminating them permanently.

Angra Mainyu calls upon these beasts whenever he requires a distraction, or numerable scapegoats for when preparing for even more colossal techniques. When his shadow is projected as a rather large body, little to no chakra is required to summon the Gen'ei considering they're birthed by that composing his shroud, in essence, his 'own darkness' contracted to passively summon the creatures from their place of origin whenever a suitable time arises. Angra Mainyu is capable of summoning forth 'advanced' forms of Gen'ei, ranging from mundane animals like dogs, to giant creatures such as elephants and even mystic-esque beasts like unicorns. In essence these shadow apparitions aren't merely controlled by him, but are in fact an extension of his own self. The entire collective is only one being which is capable of manifesting into the form of any of the six hundred and sixty six beasts, setting it apart from the regular 'infinite' quantity of regular Gen'ei, if necessary and act separately from the collective, though always mentally and spiritually united as one. When destroyed, the beasts revert to nothingness much unlike regular Gen'ei, which simply split into two, and are instead regenerated from Angra Mainyu's own shadow (or body should Bane of Light be active), making him virtually impervious to physical damage unless all 666 beasts are obliterated at once before they have the chance to revive.

Angra Mainyu is capable of condensing all 666 advanced Gen'ei into one ultimate form, the 999th Gen'ei, of which can be considered the ultimate manifestation the shadow apparitions are capable of forming into. Composed not only of the darkness/shadows condensed by Angra Mainyu, but also of a layer of decayed flesh, it possesses powerful physical capabilities and resilience, and no matter how many times it takes damage, will simply reform. It is also capable of summoning forth regular Gen'ei, although while it's out on the battlefield, advanced Gen'ei cannot be summoned forth. Only a technique capable of wiping out a continent is capable of forcefully-removing it from the field.

Retrieved from "https://narutoprofile.fandom.com/wiki/Gen%27ei?oldid=36596"
Community content is available under CC-BY-SA unless otherwise noted.