Genesis (起源; Literally meaning "Derivation" or "Beginning") is an organization of S-Class shinobi and is one of the moderately-acknowledged groups in the shinobi world. Their main goal was world domination, partaking in the subjugation of tailed beasts to bolster their overall military power in order to achieve it. Its present jurisdiction is Tenryūji.

Whilst under the influence of its previous name, "Akatsuki", Genesis's ultimate goal was to control the world; this would have been accomplished through three steps:

This is a branch of Konohagakure's ANBU training subdivision founded by the Godaime Hokage, essentially a Hokage-controlled counterpart of Root, which was led by the sub-leader of the village prior to his death, and its eventual disbandment. Much like regular ANBU, members of the Genesis Division have sworn fealty to Yūmei, although not as Hokage, but rather as the acclaimed founder of Genesis, hence their fealty is considered absolute.

The division's members were previously elitists of Konohagakure's ANBU and regulars alike (save for those occupying the gates at the time the announcement was made for all forces to withdraw, until Yūmei forcefully coerced them. They wear the standard cloak and armor of the Konohagakure ANBU, although the mask they wear is characteristically-different, bearing only one eye-hole, whilst being predominantly white, and is of an opaque-design, a mask that the Hokage himself has recently added to his attire.

When the entire force was relocated to Tenryūji, each member had chakra armor crafted for them with the assistance of the resident dragons, worn beneath their black hooded cloaks. While they aren't entirely of master craftsmanship provided the amount of time there was allocated to developing them and the quantity demanded, they're sufficient enough to provide wearers an edge in combat over similarly-powerful opponents. With a significant number of the division implanted with dragon DNA, this tier is at a reasonable height, in spite of the overall generic body. 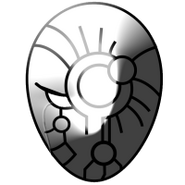 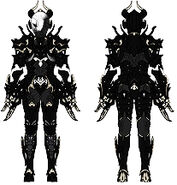 The default chakra armor of the organization's foot soldiers.
Add a photo to this gallery

The name of the organization, "Genesis" is a direct reference to the Genesis creation narrative, which is a description of the creation of the world contained in the first two chapters of the Book of Genesis in the Hebrew Bible. As a creation myth similar to several ancient Mesopotamian creation myths, while differing in its monotheistic outlook. As a sacred narrative it is part of the biblical canons of Judaism and Christianity.

Chapter one describes the creation of the world by Elohim (God), by means of divine fiat in six days and the designation of the seventh day as Sabbath, a holy (set apart) day of rest. Man and woman are created to be God's regents over his creation. Chapter two tells of YHWH-God creating the first man whom he forms from clay (or dust) and into whom he "breathes" the "breath of life". The first woman is formed from the side of the first man. God plants a garden "east of Eden" into which he places the first couple. Chapter two ends with a statement concerning why men and women are given into marriage. This account bears the marks of a carefully contrived literary creation, written with a distinct theological agenda: the elevation of Yahweh, the god of Israel, over all other gods, and notably over Marduk, the god of Babylon. The most prominent disambiguation of the term is "The origin or mode of formation of something". Example: "this tale had its genesis in fireside stories"

Retrieved from "https://narutoprofile.fandom.com/wiki/Genesis?oldid=39105"
Community content is available under CC-BY-SA unless otherwise noted.