Guruguru (グルグル, Guruguru) is an artificially created clone made by Kyu Mizushima and was designed to aid Uchiha Kamui during the times of his rehabilitation.

However he defected to the Akatsuki shortly after eavesdropping on his master's conversation with a confidant on his 'sudden' change of alignment and displaying no interest for capturing the remaining Tailed Beasts due to the influence of Kurama had on Kamui.

Guruguru was the newly elected leader of the Akatsuki due to the sudden departure of his fellow ring-bearers and thanks to the sudden intervention of the previous generation's leader, he was given the task of 'reviving' the group back into its former glory; something that he was going to do and establish the original plan for the Tailed Beasts amongst his peers.

However, not all was fine and dandy within the Akatsuki. A few series of unfortunate events made the group allegedly disperse upon the death of few ring bearers and Guruguru was left with no option but to pick up the pieces and start anew.

Guruguru tried to revive the group to no avail, days and weeks went by with no recruit into his circle of evil. Guruguru was thinking of giving up and becoming a fodder character, but that all changed when he met Sabumaru that the group became revived once again, but under a new pseudonym: Ōmagatoki.

Serving as one of Kamui Uchiha's loyal minion and spies, he left his captivity shortly after his birth and met Honō Uzumaki; after the latter was on his way towards Sunagakure. Freely thinking for himself, he designated himself the task of making sure the young Uzumaki was of use to Kamui, when the time was needed.

This half-brained mission of his, however ended in failure as he feinted having a short-attention span and left after Sunagakure's ANBU came to investigate his shenanigans.

He enjoyed annoying and teasing the villagers of the countries, he visited; the creature often pestered them about why they murmured in their sleep and the way their bodily functions worked.

Over time, he became friends with everyone he would meet and even coined the humorous name for himself: Guruguru, based on his appearance and it was a name that would eventually stick.

It is rumored that there is well-hidden secret that only a selected few individuals know about within Ōmagatoki. Guruguru is a special zetsu clone that is said to be a symbiotic parasite and houses a much bigger threat that is lurking below the surface.

Within the bowels of this creature lies a black, gooey substance. It is a substance that he formed a symbiotic relationship with upon his birth into this world, this malevolent being is his voice of reason and the projected voice can be mistaken for his own; this is an elaborate ruse on his own part.

When first entering the Akatsuki, Guruguru was playful and enjoyed teasing his superiors about the things they did in their spare time.

Although he felt that his presence around the Akatsuki was annoying his team, he eventually befriended everyone in the end; although he befriended them through a comedic-like manner.

He believes that the capture of all the Tailed Beasts is for the benefit of humankind, and even sees Bocchiere as a benevolent man. He is also kind-hearted, as shown when he decide to help anyone's cause without permission from the Akatsuki.

Because he does not carry out normal bodily functions like those around him, he is very curious to know about the mechanics behind them and will greatly pester someone of interest until they spill the beans.

During times of war, Guruguru's personality can become noticeably more serious, more akin to how his master was when it comes to any confrontation, he still retained its fascination with human bowel movements.

He also known to be sadistic, reveling in taking the lives of others as a form of stress relief and would even eat their corpse, after he was done playing with them.

Guruguru is fully white and can be easily distinguished by the spiral-pattern that stretches all over ending in a circular eye-hole. This pattern does not cover its forearms and legs, but can open up in a similar manner to the fly-trap extensions of the original Zetsu to reveal that the clone is hollow inside.

This form of Zetsu shows no visible orifices at all, but has a fully defined body.

Despite the milky outer appearance of this creature, lurking within is this malevolent being's true form. This creature is similar in appearance to the physical manifestation of Kaguya's will and has a malleable body structure that has the ability to manipulate others by simply attaching itself to that specific target.

By doing this correctly, the rapid absorption rate of chakra can render them unconscious, allowing full control of any or all abilities that person may have within their arsenal; this ability however is a double-edge sword since physical contact is needed in order to establish the mental connection needed to make that person their slave.

As a clone, Guruguru is presumed to have the standard abilities all Zetsu clones normally possess, one primary being their signature Mayfly. Guruguru and White Zetsu also claim to have a vocabulary and brain that surpasses that of a human's. Being an artificial human created from Kamui Uchiha's cells, he can survive without food or water and needs to carry out no normal bodily functions.

Guruguru has also displayed the ability to open up its top half entirely, and use itself as a bio-genetic suit to encase a shinobi/kunoichi for the sole purpose of rehabilitating.

Due to its extraordinary body structure, Guruguru is highly durable and resilient, the clone will take minimal damage from a point-blank Water Gun Technique to the head and can still move somewhat while recovering from the effects of a cursed seal.

Guruguru's genetic material is nearly identical to Kamui Uchiha and he has access to Wood Release, albeit on a much weaker scale than Kamui himself. Guruguru has knowledge of several Wood Release techniques, and was able to identify Uchiha Zexyō use of the Wood Release integrated within his own DNA by simply making himself useful as bio-genetic rehabilitation suit. 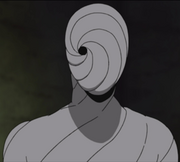