Start a Wiki
Menacing beasts that live in the mountains of Uzushiogakure, Hanehebi normally take the size of the Bijuu when they are fully matured and the size of baby elephants when they are first born. Their body shape resemblies that of a serpent, giving them their name. Additionally, their bodies are covered by incredibly thick skin and durable scales, making it increasingly difficult to do damage to these creatures. They are able to slither on land, swim, or fly skillfully through the sky, their speed in both environments tremendous. Not all of the Hanehebi are born with wings, but the majority are. They are known for pummeling their targets with a barrage of Katon and Fuuton techniques, or by simply using their excessive weight to crush them.

These legendary creatures are said to boast gargantuan chakra reserves, though still less than the tailed beasts. One ability that all Hanehebi are able to use is a 'sonic roar' of sorts, which can be used to level an entire mountain at its maximum potential. One of the more useful abilities that these creatures are gifted with is enhanced regeneration, which allows them to heal minor and major wounds much faster than normal creatures and people. This requires the Hanehebi to enter stasis in order to begin the healing process. 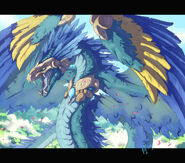 Aowa (青羽, Blue Feather)
Add a photo to this gallery
Retrieved from "https://narutoprofile.fandom.com/wiki/Hanehebi?oldid=18692"
Community content is available under CC-BY-SA unless otherwise noted.