Jellyfish (クラゲ, Kurage) are soft-bodied, free-swimming aquatic animals with a gelatinous umbrella-shaped bell and trailing tentacles. The bell can pulsate to acquire propulsion and locomotion. The tentacles may be utilized to capture prey or defend against predators by emitting toxins in a painful sting. Jellyfish are found in every ocean, from the surface to the deep sea. Jellyfish range from about one millimeter in bell height and diameter to nearly two meters (6.6 ft) in bell height and diameter, the tentacles and mouth parts usually extend beyond this bell dimension, and can weigh up to 200 kilograms (440 lbs). Most jellyfish are carnivorous though some may live in symbiosis with another being.

Jellyfish sting their prey using nematocysts, stinging structures located in specialized cells called cnidocytes. Contact with a jellyfish tentacle can trigger millions of nematocysts to pierce the skin and inject venom. A lance inside the nematocyst pierces the victim's skin, and venom flows through into the victim. Touching or being touched by a jellyfish can be very uncomfortable, sometimes requiring medical assistance; sting effects range from no effect to extreme pain to death. Even beached and dying jellyfish can still sting when touched.

Some of the larger jellyfish can utilize the Water Release chakra nature in combat. They can also utilize Medical Ninjutsu to heal their summoner and allies, converting their venom to a healing serum.

The King Jellyfish (キングクラゲ, Kingukurage, "King Jelly") is the oldest and largest jellyfish on the planet. Because of his long life, he has learn to understand and harness natural energy. He is able to teach Sage Mode but only to those who have proven themselves. 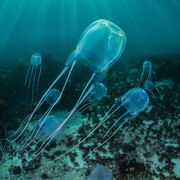