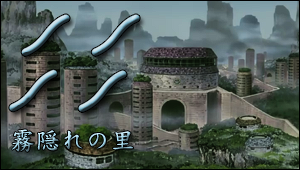 Kirigakure (霧隠れの里, Kirigakure no Sato; Literally meaning "Village Hidden by Mist"), infamously known as the "Village of the Bloody Mist" (血霧の里, Chigiri no Sato), is the shinobi village located in the Land of Water. As one of the Five Great Shinobi Countries, Kirigakure has a Kage as its leader known as the Mizukage. There have been seven Mizukage, the current one being Gitsune.

Befitting its name, the village is surrounded by a thick mist, with several mountains in the background and a forest as well, making it difficult to find by foreigners. Kirigakure's architecture is composed of several cylindrical buildings (most of them restored via a Mokuton Technique), with the Mizukage's office being the widest and largest. Most of the buildings have vegetation growing on their roofs.

The standard attire for Kiri shinobi revolves around a pinstriped material which the shinobi wear as bracers and greaves which merge into their sandals. Underneath this, they wear a full-black shirt and pants over which they wear the villages' standard grey flak jacket. Some also wear waist-guards. The shinobi from this village are very proficient with Water Release techniques and kenjutsu. Due to the village's high number of missing-nin, Kiri has a subdivision of ANBU known as Hunter-Nin that are specifically tasked with eliminating these defectors.

Far away off the coast of the general mainland lies a mysterious collection of islands, shrouded in an eerie, permanent mist; this is Kirigakure no Sato. The ninja here have an impressive reputation of being fearless, cunning, and strong beyond all measure. Most shinobi from this village have an affinity for Water Release and display exceptional skill in kenjutsu. Some shinobi even displayed having an affinity for Ice, with connects it to the Hyōton Kekkei Genkai.

Due to being so far away from the mainland, Kirigakure is often a tight-knit community in which many of the citizens help and support one another. The people are often cautious towards strangers and visitors, quickly turning hostile if they threaten the safety of the village and its residents. Although Kirigakure is no longer the "Village of the Bloody Mist", the shinobi are no less powerful, or ruthless, than times past. They are adept in both skill and physical prowess, with the ability to adapt to situations as fluidly as the water around them.

The Mizukage (水影, lit. Water Shadow) is the leader of Kirigakure. There has been seven official Mizukage; their word holds sway over all political and military issues that present themselves regarding Kirigakure and its inhabitants. The Mizukage's building is the largest landmark in Kirigakure, bearing the kanji for Mizu (水, lit. Water) on it. 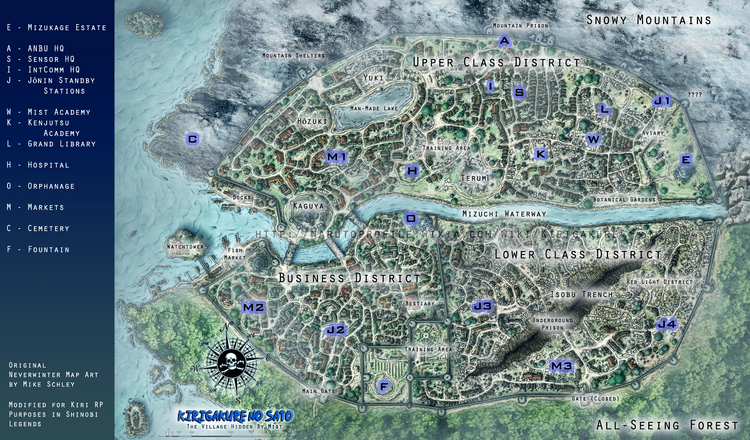 ** - Places that are known only by specific groups or individuals only

Another special division working alongside the Sensor Division. Their job is to gather vital information regarding any possible and current threats to Kirigakure itself then relay it to the higher ups of the village and at times, the ANBU. Chakra Transmission Communication Devices (both stationary and portable) are used by this division where they can receive any reports from the Sensor Division or from those members who are out on missions. Shinobi who are skilled in espionage are also included in this group.

The ANBU take orders directly from the Mizukage in which they perform special high-level missions, such as assassinations, torture, tracking, surveillance, and missions requiring specially trained ninja. They also protect the village from exceptional threats, conduct high-risk missions into enemy territory, and deal with extremely strong ninja as they work in teams formed to the requirements of the mission, ensuring maximum success. Team leadership and hierarchy seem to be based on merit and experience. The leaders of the teams are called squad leaders (分隊長, Butaichō), a position held in high regards.

The ANBU wear porcelain masks in order to distinguish themselves from normal shinobi and to conceal their identities. They also have standard uniforms consisting of black and gray armor, metal arm guards, and a signature spiral tattoo on their shoulder. Some ANBU wear black cloaks over their standard uniforms, and squad leaders may wear white cloaks. Most ANBU carry katana, which are usually strapped to their backs.

This division is tasked to be the "eyes" of Kirigakure. Composed of skilled sensors, they utilize a number of Sensing Water Spheres to monitor those within the village and the sentient forest as well as those coming in and out of it. In case a foreign chakra signature is detected, they use the Telescope Technique to see whether the person is friend or foe.

Seven Swordsmen of the Mist

In addition to the powerful ANBU and the Four Legendary Yonnin of the Mist, there lies a group of seven swordsmen that are sworn to the village of Kirigakure. The Seven Swordsmen of the Mist are the top seven shinobi hailing from the village that are known for their prowess with blades. Though they are masters with swords, they are adept at various elemental jutsu as well; they are known as masters in using Water Release jutsus.

In Kirigakure, there are the Four Legendary Shinobi; also known as the Yonnin. Similar to the Sannin of Konohagakure, these four shinobi displayed the utmost courage and strength in times of desperation, and have been the most loyal of all Kirigakure nin. They are handpicked by the Mizukage to be the his/her bodyguard as well as replicates at times. The Yonnin are shrouded in mystery. The following go by seniority; Ichiban, Niban, Sanban and Yonban.

These rules apply directly to those who mainstream roleplay within Kirigakure:

The Land of Water is composed of many islands that are far from the mainland where the other four great shinobi countries are. Getting to the main island where Kirigakure is located is a challenge in itself because of how remote the area is. The seas that surround the archipelago are always battered by winds and storms making the journey dangerous; ships risk being toppled over by huge waves and strong winds before sinking to their demise. Kirigakure's distance from the mainland also requires those who perform Space-Time Ninjutsu to travel instantaneously will find it draining due to how far it is; distance plays a vital role in Kirigakure's defenses.

(Grown by Hagoromo Gitsune on June 26, 2014)
A dense, sentient forest spanning 10 kilometers from the village walls had been instantly grown by the Ichiban Yonnin to keep an eye on those going in and out of Kirigakure by passing through the woodland, be it on foot, underground or even in the air. Special 'eyes' sprout from every possible position in the area. If a threat is detected, the forest can provide an initial defense to give those within the village enough time to prepare.

(Cast by Hagoromo Gitsune on June 27, 2014)
The entire area of the forest up to the gates is constantly blanketed in a thick white mist, a variation of a secret jutsu passed down between Kirigakure elites. Passing through this mist will quickly eat up any chakra that is not similar to that of the Ichiban Yonnin.

The mist also extends into the village, yet is weaker than the mist outside. It also does not affect certain individuals as they cast and/or maintained the mist itself. They are Gitsune, Mioku, Eiko, Dart, and Xiarawst. Those who are responsible for upkeep are Silence and Saino.

(Made by Kaguya Eiko on Sept 16, 2014)
After the last gate was destroyed in an attack on the village in the past, it was suggested that Kiri made stronger, more durable barriers to keep out outsiders and would-be intruders. Made from very resilient Kaguya bones of one of the Seven Swordsmen, the new pearl-white gates of Kiri are able to withstand most damages the environment and man can bring upon it.

(Erected by Dart Terumī on Dec. 18, 2014, Recast by Silence on May 1, 2019)
The Sensing Barrier is a giant, dome-shaped barrier placed around the entire village and passes its boundaries 15 kilometers in all directions, including the air, underground, the sentient forest and now inside the village. The barrier is not visible to the standard eye; when viewed with certain dōjutsu, it can be seen that there is a design of several circles which have the kanji for boundary (界), and barrier (結界, kekkai) inscribed in them. All activities are monitored within a Sensing Water Sphere and all unauthorized passage in and out of the barrier can be detected and pinpointed. This has been recast by one of the Yonnin of Kirigakure to ensure its optimal effectivity.

(Erected by Dart Terumī on Dec. 18, 2014, Recast and modified by Silence on May 1, 2019)
Four Members of the Kiri Kanchi Butai erected an Anti-Jikūkan barrier that follows the same spherical shape of the sensing barrier except it extends only for 10 kilometers (in all directions) and now extends right inside the entire village. Only Kirigakure forces may use any Space-Time Ninjutsu techniques, including summonings.

Due to the attack by Serean that came upon the village which resulted in several residents being affected, the Mizukage has tasked her half-sister to make a stronger barrier that will repel any similar attacks like it. Given that the Nanadaime Kazekage's temporary barrier already broke, it was necessary to recast a newer, sturdier one. With the teachings of a certain individual, the medic-nin was able to do a barrier that can repel most attacks, including of the spiritual nature. Silence maintains upkeep of this newly erected barrier and was given permission to make any intruders/criminals combust into flames (once ordered) within the area of effect of the barrier to ward them off.