Seijin Saikōsai (サイ湖西市星人, Saikōsai Seijin) is a S-rank shinobi hailing from Konohagakure, and is a member of the local ANBU division, later joining the ranks of Genesis. He is renown for being a diviner, specializing in dealing with the undead and the downright demonic.

When Seijin was a young child he grew a profound interest in the miniature puppets his father would bring home from Sunagakure as a gift, being a travelling merchant for his family's sake. This interest later encouraged the boy the learn how to construct such puppets, although the ones he created were unfit for battle, and being that Konoha lacked a sufficient enough of manuals concerning how to create the Wind Country-native contraptions, he lost interest several years later.

When he was enrolled in the Academy, Seijin soon retook his interest in constructing objects, only this time he was far more interested in origami. In class he would fold paper into shapes resembling cranes and small soldiers, then animate them by applying chakra to their structures. He graduated after a couple of years and when he eventually passed the Chūnin Exams took to taking missions requiring him to travel internationally.

Using his time wisely, he travelled to Sunagakure on regular intervals, having reinvigorated his interest in the local manipulation of puppets. Under the tutelage of local puppet makers, he learned how to manipulate threads as well as construct his own puppets. At this point in time though his only interest was in learning how to utilize threads in practical ways. When he returned to Konohagakure, he trained as a Medical-nin for a year, possessing a high level of chakra control he quickly learned how to both heal and inflict wounds through the manipulation of chakra. At this point he was capable of utilizing paper ninjutsu in a unique fighting style called Shikigami. It was through his unique skill in controlling both people and paper to quickly assassinate foes that the Hokage promoted him to the rank of ANBU.

When the Godaime Hokage commenced his reformation, Seijin consented to being inducted into Genesis's ranks.

Seijin is calm, collected, and highly perceptive. He appears to be respectful of those around him as he doesn't like freely speaking about others' pasts; as a result the other villagers have perceived him to be a 'very nice person'. He is a shrewd person, and is not a man who would do something without reason. He is very knowledgeable of the ninja world, as well as the horrors which torment victims of wars and of the darkness which haunts the consciousness of man, inspiring him to partake in learning medical ninjutsu.

Seijin is a relatively tall and thin man who has glaucous-coloured eyes and vanilla-coloured hair. He also wears glasses and wears long, white robes which extend right down to his feet. It does not however conceal his chest area, which he covers with a blue breastplate and wears a black kimono underneath. Seijin wears a strange necklace with exotically-coloured feathers attached to it for reasons unknown. His attire has often led to the villagers referring to him as 'smartly-dressed'.

He wears rangs of paper on his fingers, which beneath them are coils of thread, used when he chooses to control people with them or for grabbing physical objects from a distance.

Seijin is well-versed in the application of various styles of ninjutsu, particularly in manipulating physical objects. He possesses the Curse Seal and is able to use it to the extent of being able to activate its second level, where he sprouts wings from his back with a noticeable darkening of his skin color and lips. His hair in particular is dyed black, giving him the appearance of what some refer to as a 'fallen angel'. He is also capable of using Rasengan in battle, providing for him excellent versatility in fighting at both short and long ranges.

Seijin has shown a natural talent for origami, even developing it into his main ninjutsu. He has created a unique transformation technique called Dance of the Shikigami, which can turn his entire body and clothing into thousands of sheets of paper, which he can control at will and form into any shape or colour. To travel long distances, he can fold them into butterflies or planes for powered flight, and to attack, he hardens the sheets to the point when it is as hard as steel and folds them into arrows, spears, and shuriken. He can also restrain opponents by blanketing them in sheets, thus restricting their movement and asphyxiating them. The papers can also form large wings for further weaponry, though he is capable of hovering without them.

The power of the paper attacks are capable of overpowering a fire attack. Seijin is susceptible to oil-based attacks, which stick to him and keep his paper from unfolding and possibly because his paper is still as light as normal paper and only more durable the oil is probably heavier and restricts the papers movements. However he is not hampered to the same extent by water. Seijin can make Paper Clones that he could use to fight in his place. He can hide explosive tags in them so that they would explode, and catch an enemy off guard. One of Seijin's most powerful techniques is the Paper Person of God Technique, which can split a large lake. The technique contains six hundred billion explosive tags that would explode for a full ten minutes. Seijin is able to produce and fold enough paper to mimic environmental surroundings, allowing him and those of his choosing to hide in places one normally wouldn't be able to.

Unlike common ninjutsu, Shikigami is performed though paper mediums known as "rei". There are generally two types of rei: shiki rei and summoning rei. Rei are created by writing special characters/glyphs onto paper. Higher level reis typically have more characters of greater complexity. People with ugly calligraphy or a clouded mind tend to fail in making reis. A rei can only be used by the person who created (wrote) it.

A shikifuda, when used, turns into a shikigami to do the user's bidding. Low level shikigamis usually look like origami (folded paper), although high level shikigamis may have a variety of appearances. Many types of shikigami exist. Some are capable of attacking, while some are used as barriers to block attacks. Some are used to rely information across great distances, and some can be used for spying. Depending on the strength of the user, the number of shikigami they can command at once, as well as the abilities of the shikigami, can vary greatly.

Being trained by a number of skilled puppet users, in the art, Seijin is a master of puppetry and possesses great skill in controlling them. His status as a master puppeteer offes him a tremendous advantage against other puppeteer shinobi, especially if the puppets they were using happened to be have been used during the time he learned the art. As puppets are usually installed with long-range weapons, Seijin an expert at fighting at long distances. He can also control living people as puppets, even against their will, if they are weakened enough.

Despite his age, Seijin has demonstrated tremendous skill and ingenuity in medical ninjutsu. With his extensive knowledge of medical ninjutsu and of the human body, Seijin can quickly adjust to any damage done to his body and severely injure a person with a single chakra-infused strike to the chest. He has also developed the unique ability to be able to reactivate dead cells and grow new ones. He is capable of using the Chakra Scalpel without any hand seals, and still powerful enough to cut through wood and flesh with ease, and can use the Mystical Palm Technique at a distance.

Seijin has demonstrated to be a highly cunning ninja, able to handle situations with various traps and misdirection. He is also shown to be a highly analytical man, able to quickly determine his opponent's strengths and combat methods. He was able to gain a mastery over medical ninjutsu within a year, which is a great feat considering it usually required a practitioner several years to learn how to even learn to treat the smallest of wounds. He has also been shown to apply intellect to his high level of creativity, effectively learning to utilize both puppet ninjutsu and paper ninjutsu simultaneously under normal circumstances. 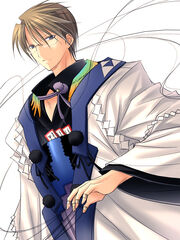