Suishou Koji (浩二師匠, Suishō Kōji) is the current Rokudaime Raikage. He has been well known around the shinobi world, having a great history with many shinobi, dubbing him; The Elder of Shinobi Legends.

Beginning Long ago, Koji was a village-less child. At the age of 15, he had left the village of Kirigakure after trying to kill the Mizukage. The shinobi of that land tried to capture him and judge him on his actions, but had failed in that task. This was in the ending hours of the war between the Mist and the Sound. His actions didn't come without merit though for a member of the infamous Akatsuki had found Koji and took him under his wing; this man also being another shinobi of the Mist. Being a ruthless and cold hearted shinobi, Koji later killed the man who trained him and took his position in the Akatsuki at the age of 16. Being the youngest member, many of the Akatsuki thought he could be used and controlled. A month later Koji simply vanished from the Akatsuki, the members of the infamous clan claming him to be dead. It would be years later until Koji returned.

Koji lived in the village of Sound for a time. Within that time he served as an ANBU for a year. As his age increased, he became tired of being an ANBU and left. Then he departed from Oto to stand at the great gates of Konoha. He now lives in Konoha for mostly training. Over the life of living in Konoha he met many people but could only trust few. Due to knowing so many, Koji was graced with the title of Elder for Konohagakure and became a well known friend to the Yondaime Hokage Tomi. Through Tomi, Koji had developed the a similar mind set as the man his enemies becoming Koji's enemies. Unfortunately after hearing the death of his long known friend, Tomi, Koji went from being the peaceful man he was to attacking the guards of Konohagakure and in thus leaving the village. From there he traveled to Sunagakure to hide for a time and then went to Kumogakure to become a full-fledged shinobi of the Cloud.

Many years had past since he left Konohagakure; leaving behind all his good friends and his Elder title. Koji's new life however was becoming much better than his former life. A friend and bodyguard to the Raikage, increasing his knowledge in the Rasengan. Having been playing the role of the Raikage's right hand man, the current Kage stepped down from his position to grant Koji the title he had been yearning for to become Raikage.

He once was a cold hearted shinobi during his time within Kirigakure and the Akatsuki, however after spending most of his life in Konohagkure he developed a very kind attitude. He choose to become a man of peace and serenity, having those around him not to become his enemy, but their friend. Though it seems that even despite Koji's attitude switch, his old self sometimes appears. It had only happened twice, once when he heard the Yondaime was killed and when Koji's wife was killed in battle.

Koji's build is average with short cut black hair. For the longest time, he always had Turquoise eyes however recently he had gotten a hold of two Byakugan eyes and in thus implanted them in his head. Upon the skin of his right arm are three deep sword wounds that have now scarred; the wounds from a battle between the Yondaime Raikage. Also on several different places upon his skin are tattooed seals that store large amounts of chakra. What he wears on a causal day, is mostly all black: a lightweight buttoned up long sleeved shirt, lightweight long pants, and his ninja sandals. Tied to his right leg's thigh, is his Kumogakure headband.

Koji started his training early on, more in the skills that would allow him to survive in the harsh world he entered; being trained both within Kirigakure and Otogakure. He took more intrest in learning about all he could on the nature of Chraka itself and how it effected each individual, be them trained as a shinobi or not. Over time, he began to adapt himself in the attempt to make him a more versitle shinobi than focusing on a specific style. Examples are when his eyes couldn't keep up with the speed of certain shinobi he had his eyes replaced with the Byakugan instead of waiting to see if the Uchiha bloodline would be within him like his brother. When he took notice to how the Bijuu hosts had vast Chakra pools, he created a seal that allowed him to store chakra over time along his person and use it as a reserve to attempt to get that similar effect. To attempt to match the speed of the Hirashin, he began to attempt to advance the Raiton no Yoroi to allow him to get the close to speed without tearing his body to pieces. 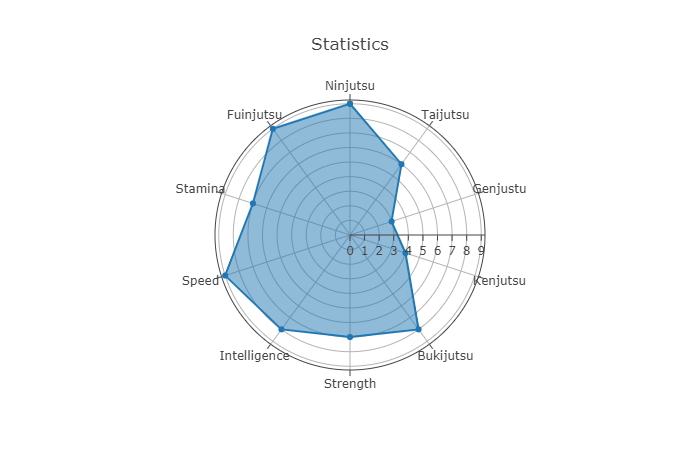 Retrieved from "https://narutoprofile.fandom.com/wiki/Suishou_Koji?oldid=69738"
Community content is available under CC-BY-SA unless otherwise noted.