Susano'o, also known as the Tempestuous God of Valour (勇武の荒神, Yūbu no Aragami), is the ability granted to those who awaken the powers of both their Mangekyō Sharingan. It creates a gigantic, humanoid being that surrounds the user. As one of the strongest techniques granted to those that have acquired the Mangekyō Sharingan, it is the user's guardian deity, but at the same time, it consumes the user's life.[1]

According to Tobi, for a Sharingan user to activate the Susano'o is a rarity.[2] Like the other techniques granted by the Mangekyō Sharingan, the user's eyes and body are strained while using Susano'o because it consumes a large amount of their chakra. Sasuke described it as feeling pain in every cell in his body which only grew from prolonged use.[3] Susano'o is formed through the materialisation of the user's chakra and as such differs in appearance as well as colour between users. Even though it envelopes the user, they can move around within Susano'o freely and use techniques from inside of it,[4] as well as manifest parts of Susano'o — as the situation calls for it.

Despite Susano'o's impressive defensive capabilities, the protection it grants its user is not absolute. The user can be thrown out of the upper half of Susano'o by an enemy manipulating the substance underneath Susano'o. This was seen when Gaara used his sand to pull Madara out of his Susano'o.[5] Also, a sufficiently powerful attack will still result in damage, especially during the technique's developmental stages. The only known ways to attack the user while Susano'o is active is either to draw the wielder out of the technique and then attack,[5] bind and restrict its movements, or to break the defence with overwhelming force. Susano'o users are also vulnerable to attacks which don't actually deal physical damage to it, such as strong lights and sounds, that can also impair their ability to sustain Susano'o.[6] The users are also still succeptible to such things as sound-based genjutsu.[7]

Each Susano'o goes through several different forms, which the user can switch between at will or even leave in a state between forms.[8] The development of these forms was best demonstrated while Sasuke was learning how to use the technique, gaining additional forms as his control over it increased. In its earliest form, users can only manifest some of Susano'o's skeleton. A smaller version of Susano'o's ribcage is generally produced first which, while providing a good defence, can still be fractured[9][10] or even melted.[11] An arm can also be formed, which is sometimes connected to this ribcage, and can then be used to interact with the surroundings.[12] It is also possible to utilise one of Susano'o's weapons using said arm[13][14] and change its size as needed.[15] When first forming, Susano'o manifests around the user like an aura.[16]

As users gain additional control, musculature and skin begins to appear atop of its bones, which progressively complete the full skeletal structure. It is only when Susano'o's growth is fully matured and thus, the user is completely surrounded, are the vulnerabilities of the skeletal form finally eliminated. However, it should be noted that Susano'o can also appear behind the user, instead of just surrounding them.[17] The user can also change the size of it to fit the current situation.[18] Eventually, Susano'o develops into a "complete" warrior-like form, where its skin, armour and final arsenal of weapons are manifested in their entirety. At this stage, it can anchor the user to the ground, preventing opponents from forcibly moving them unless they can get through Susano'o's various layers. In its final form, this fully humanoid shape is further surrounded by a secondary layer of armour that causes Susano'o to resemble a yamabushi.

Though users of this technique often only form Susano'o's upper half, legs can be manifested to give it a complete body, granting it increased mobility. Some users, who have attained perfect mastery over this technique, are capable of stabilizing Susano'o's chakra, causing it enter a colossal "Perfect" form. 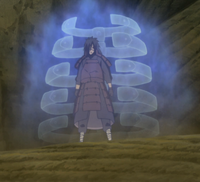 Incomplete Susanoo.
Add a photo to this gallery 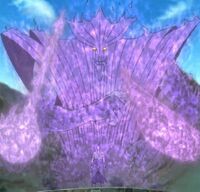 Complete Susanoo.
Add a photo to this gallery 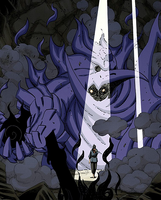 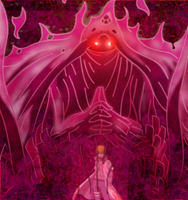 Final Susano'o - Uematsu Tomi
Add a photo to this gallery

Mastery over Susano'o can allow the user to manifest the Complete Body — Susanoo (完成体 須佐能乎, Kanseitai — Susanoo). In this state, its armour becomes more solid and samurai-like, forming robes, pointed shoes and body armour on its shoulders and waist. It gains a long tengu nose and two lines running down from its mouth to its chin area, as well as hair which is tied up at the sides. Its primary arms lose their plating and decrease in size, while its secondary arms extend behind its shoulders as wings. Rather than undulating blades, this form wields a pair of straight katana, which are sheathed by its winged secondary arms and wielded by its primary arms. The offensive power of this Susano'o is comparable to that of a tailed beast. Users of this have the ability to equip this stabilised Susano'o onto their mounts, to complement their respective abilities. 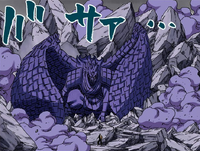 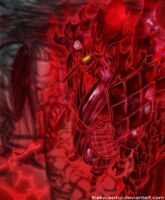 As users gain more control over Susano'o, they are able to extend their power by forming weapons. Like Susano'o itself, the appearance and abilities of the manifested weapons vary between individuals. Additionally, as Susano'o becomes more powerful, its weapons do so as well.

All users of Susano'o are able to manifest at least one sword for the ethereal warrior to wield. They can vary in from from a tantō, a sabre or even a kris. Despite their variations, each sword is extremely effective and evolve along with Susano'o. With it, users are able to cut through a Kaguya's bones, which are known to be harder than tempered steel. In a Susano'o's Perfect form, they are strong enough to block a Tailed Beast Ball being pushed against them by an equally-powerful opposing force.

If the user is able to control Amaterasu's black flames, they are able to forge a sword from an orb-like collection of them that their Susano'o can wield. This orb of black flames, as well as the blade it is used to produce, could even be wielded in Susano'o's simpler forms. 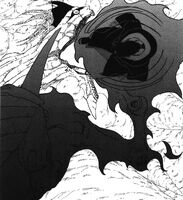 A Susanoo sword in the form of a tantō. 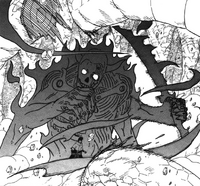 A Susanoo sword in the form of a sabre.

A Susanoo sword composed of black flames.
Add a photo to this gallery

In its completed state, a Susano'o is capable of wielding an unusually shaped bow which usually manifests on its left arm, though it can vary between users. In another hand, a Susano'o can hold an orb capable of creating arrows which can be fired through the bow at such a speed that evading them is nearly impossible. The bow can also double as a shield strong enough to withstand attacks capable of shaving away at the terrain in Susano'o's immediate vicinity. The arrows, which are seemingly made with variable thickness based on the user's discretion, travel at a very high velocity and possess considerable piercing power; enough to easily breach a tree created by Wood Release. Only skilled users utilizing the extrasensory capabilities of Sage Mode are been able to successfully avoid these arrows thus far.

When Susano'o enters its final stage, the bow gains a notable increase in size, more closely resembling a shield. Upon first entering this stage, a Susano'o can also gain access to an orb made up of black flames, which can be manifested in any of it's forms. This can grant the ability to produce arrows made up of black flames from said orb, which can also be used with Susano'o's bow.

A Susanoo's arrow and bow.

A Susanoo's arrow of black flames.
Add a photo to this gallery

Akin to the Yasaka Magatama, performing Susano'o can also manifest multiple shuriken. They take the shape of the user's Mangekyō pattern and while handheld in proportions to Susano'o, their individual size are massive.

Add a photo to this gallery

Retrieved from "https://narutoprofile.fandom.com/wiki/Susanoo?oldid=61777"
Community content is available under CC-BY-SA unless otherwise noted.