The Tailed Beast Ball is the ultimate technique of a Tailed Beast. To form the attack, they gather both positive black chakra (+の黒チャクラ, purasu no kuro chakura), and negative white chakra (−の白チャクラ, mainasu no shiro chakura), shape it into a sphere, and then compress it inside their mouth. The black and white chakra needs to be balanced at an 8:2 ratio respectively or it will backfire.[1] The ball can be fired differently, either in sphere form, which can be detonated for a wave explosion or launched to form a dome-shaped blast which flattens and erases everything around it, or as a concentrated beam of energy which gives it explosive penetrative power. A Tailed Beast Ball is incredibly dense, as when Naruto Uzumaki in his four-tailed form created one, ground around him sunk beneath his weight after he swallowed it.[2] When used in close proximity to other tailed beasts performing the technique, the Tailed Beast Balls can be combined, vastly increasing the attack's destructive power and size.[3]

The power of the attack is relative to the power of the user. The technique fired from a four-tailed Naruto broke through three Rashōmon gates without losing its momentum.[4] A fully charged Tailed Beast Ball from Gyūki can fill an entire valley with the explosion as well as plough through a multiple layered barrier,[5][6] while Kurama's own can create an explosion that is far larger than Konohagakure's Hokage Monument and the mountains around it,[7] as well as equal that of a combined ball of five tailed beasts.[8] Individual Tailed Beast Balls from Matatabi, Isobu, Kokuō, Saiken, and Chōmei seem to be on the same level of destructive power since they all easily vaporised large mountains after Naruto deflected them.[9] When used by the Ten-Tails in its mature form, the Ten-Tails' Tailed Beast Ball took on a conical shape,[10] and upon impact was able to destroy an entire village some distance away.[11]

The tailed beasts' Jinchūriki can also use this ability, though they need to be in their full tailed beast forms.[12] Should the jinchūriki lose control of their tailed beasts, they can perform this technique despite not being fully transformed, as seen when Naruto used it in his 'Version 2' form.

The positive and negative chakra is gathered into a ball.

The ball is compressed to a small size and then ingested.

After the pressure builds, it is fired in a powerful beam.

If the ball isn't compressed, it can be launched as a powerful wave explosion.

The ball can also be fired without being compressed. 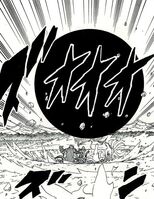 The Ten-Tails' Tailed Beast Ball.
Add a photo to this gallery

Retrieved from "https://narutoprofile.fandom.com/wiki/Tailed_Beast_Ball?oldid=30326"
Community content is available under CC-BY-SA unless otherwise noted.