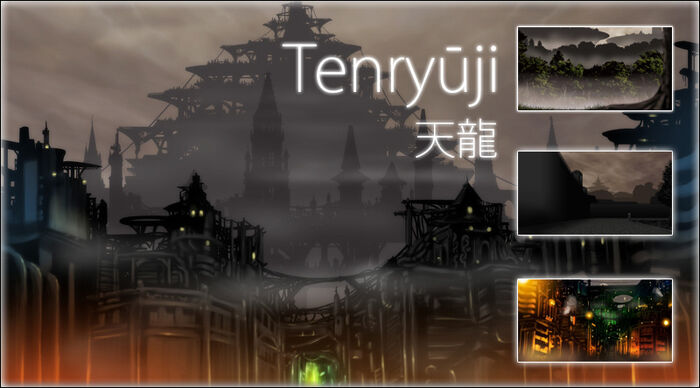 Tenryūji (天龍) is the sacred place of the land of dragons, Genesis and the denizens of Konohagakure whom the Godaime Hokage brought along with him. It is located on a separate continent to the one densely populated by shinobi, where a mystical mist constantly runs throughout the land, which geographically-wise is roughly the size of a major village, such as Konohagakure, though with the current development taking place can be considered more a 'city' rather than a 'village', and than a 'haven' intended solely for dragonkind any more.

This development is currently unknown to the outside world, nor can the city itself be directly breached via Space-Time Ninjutsu due to the defences situated there. The land itself can only be accessed through the assistance of a contract signer of dragons, or via the Ryūmon Gate, though the numerous safeguards in place render unauthorized access considerably dangerous to perpetrators.

It is also due to the development, and what it has achieved that Tenryūji is referred to as a city, rather than a creature-exclusive venue by its denizens.

This page will be constantly undergoing revisions in response to those conducted in-game.

The 'city' consists of thirteen tiers, each resting on their own plate of corresponding ranking; twelve out of the thirteen are situated above ground level, the last is situated underground. The Hokage Residence is only accessible via the Thirteenth Tier, even though its foundation rests on the tenth. Shops litter the Lower Tiers, predominantly run by their original owners when in Konohagakure, some of the more popular ones, such as Ramen Ichiraku owning multiple across multiple tiers were business booms the most. There are numerous factories also situated in the Lower Tiers, which manufacture lower quality Yliaster for purchase by civilians, as well as weaponry and minerals for further usage. Travel between Tiers is achieved via cable cars. There are numerous basements beneath the lowest tier which extend into dark depths, concealing and nurturing terrors bred by the city's ruler.

The Great Wall surrounds the city, both above and underground. It is near-impenetrable.

As with the city's construction, a multitude of forests were torn down, and numerous mountains were leveled. The few remaining forests were relocated and distributed amongst several of the Upper Tiers, where via Wood Release also house hidden plantations for sustaining all of the Tiers. The Lower Tiers are cluttered with residential buildings, shops and factories. The Upper Tiers, reserved for the administrative activities of the Genesis Division and the original inhabitants of the land are relatively desolate, when compared with the Lower Tiers. Several of them house forests extracted from the land while the city was being constructed, which nurture plantations used for sustaining the entire city population. It is also within these forests that most of the land's original inhabitants, the dragons occupy. A number of the dragon-owned buildings are preserved deep within them, including the sacred palace the Shiryū occupy, and the Great Dragon Sage's palace which burrows deep beneath it. The Hokage Residence reaches deep beneath the city, housing innumerable terrors conceived by Yūmei Kokūzō's efforts. Deep beneath the city exists a secondary realm to that above, where monstrous constructs and establishments are overseen by his antithesis. The Great Wall spans down to these deep levels as well, of which cannot be sensed by anybody on the surface due to a formation of sensing-jamming tags present on the walls.

One of the Lower Tiers.

One of the Upper Tiers.

A basement underneath the lowest Tier.

One of the few forests remaining, occupying one of the Tiers.

The realm deep beneath the city.
Add a photo to this gallery

Tenryūji is natively populated by multiple legions of Dragon Knights and the Shiryū (四竜, Four Dragon Kings), whom protect the land from outsiders with their abominable power. The Great Dragon Sage and the species' more civil residents also roam the land, although participate in far less conflict as their combat-attuned associates. With Genesis' presence, the organization's members, as well as the great host of Konohagakure's migrants also occupy the land, or rather the city which was constructed shortly after their arrival. Throughout the thirteen Tiers, Yliaster Knights patrol the streets, each one capable of wiping out entire squads of ANBU with ease.

This is a detection type barrier that can be used to surround an area and allows the users to monitor a certain area. The barrier can also be moved according the the requirements of the user. Notably its circumference is spaced two-meters away from the city walls. It surrounds all of Tenryūji and is used to detect anyone entering and leaving the land even from the sky or below the earth. The dome has a pattern on it similar to the crest of the Barrier Team. The barrier is essentially a dome covering the land, although it probably continues underground to form a sphere. The circles on the barrier hold the kanji for boundary (界), the second kanji in the word "barrier" (結界, kekkai).

A barrier empowered by a crystal located within the depths of the Hokage Residence, its circumference encircles the city's walls, one-meter away from them to be precise. Whenever it is active, all ninjutsu that makes contact with it, whether it originate from the inside or the outside, will be absorbed. Unlike the standard technique, the barrier does not absorb the chakra of living organisms that pass through it, predominantly humans at that. It may only be deactivated by somebody possessing the Preta Path and knows of the technique-specific hand seal that the Hokage himself created. Those possessing the new seal may completely ignore the barrier's effect, though.

The Space-Time Ninjutsu Disruption Barrier (時空間忍術茶々結界, Jikūkan Ninjutsu Houkai Kekkai) prevents anyone from traversing beyond it from either side through the means of space-time ninjutsu. This barrier extends roughly 1 meter beyond the city's walls and is, as the other barriers, a spherically-shaped one, half of it - a dome residing underground, this design being intended to prevent others from otherwise evading it. The Space-Time Ninjutsu Disruption Barrier was erected by Darkshinobi at a time at which the Yondaime Hokage was declared enemy of Konoha. Even after the latter's status was forsaken, the barrier was left standing due to it's usefulness. Basically, it prevents those other than known manipulators from using space-time ninjutsu to traverse in and out of the land, as well as summoning objects stored externally of the land (such as creatures one has a contract with; exempting pocket dimensions and the sort). The barrier is presently sustained by a gargantuan crystal deep beneath the Hokage Residence. It is forged out of a special "Crystal Gem" (結晶石, Kesshōseki), one which quite flexibly utilizes the mass of chakra stored inside just enough for the barrier to retain functionality, while expending as little chakra as imaginably possibly. It need only be refilled on the rarest of occasions.

When Yūmei rewrote the barrier via the crystal which contains the source of its power, he became its sole manipulator.

A dense, monochromatic mist has been released from the utmost bottom level of the Hokage Residence modified to operate outside of the tower in the city's atmosphere, which absorbs chakra and when inhaled corrodes a person's chakra network, and eventually the vitality of those lacking the second version of a particular seal. This veil shrouds the entire sky of the city to an unknown altitude, and leaks outside over its walls to the halfway point of their heights, rendering them next to impassible.

The soil outside of the city is monochromatic, and devoid of all natural life. Beneath the surface is a network of red branches which constantly harbour, funnel and exert the mist responsible for rendering the soil completely inaccessible. Regardless of the organism, anything that attempts to enter the affected ground would expose themselves to the vitality-deteriorating mist, as if they had already inhaled it. Even unnatural life such as Wood Release creations would be drastically sapped away, regardless of their effects, and destroyed rapidly. This defence is maintained by two trees existing deep beneath the city in its underworld, which constantly regulate the natural energy in abundance there to render the mist as violently potent as possible; it exists primarily to prevent invaders from forcefully accessing the deep recesses of the city, in order to access the city's lowest tier or underworld.

A forest of the pitchest black surrounds the entirety of the city, extending to even the forests and mountainland initially untempered with during the city's initial construction. A poisonous blood red mist pours throughout it, of which is accompanied by the monochromatic mist another defence produces. The forest exists as an exception to the Amenominakanushi Sephiroth Gevurah Underground Network barrier, made by Yūmei Luenah. The same crystal maintaining the aforementioned barrier also stores the natural energy absorbed by these trees, which will no longer release that which they've absorbed even upon destruction. The trees also lash out at organisms that dare tread by them, in an effort to spill more blood to increase the mist's lethality.

They make up seventy-five percent of Tenryūji. The term refers to everything other than the City's peak. Separated into Tier Plates numbered from one to thirteen, the higher parts are inhabited by the bourgeoisie and entrepreneurs. The lower one goes, the more poverty stands out, though it is maintained at a reasonably low level. In the City's Lower Tiers, most humans are either consumers or labourers nor else they're nothing more than salesmen.

Retrieved from "https://narutoprofile.fandom.com/wiki/Tenry%C5%ABji?oldid=42782"
Community content is available under CC-BY-SA unless otherwise noted.