As years went on in his Academy days, he used to joke around. Some found him to be annoying, rude, or even repulsive because of his personality. After graduating the academy at the age of 8, he changed his ways for the greater good and became one with a nindo to try and dissolve hatred so peace may roam free. He became a hard worker to strive toward those goals, and eventually he would have found himself taking the Chunin exam at such an early age.

At the age of 10, he would then find himself at the Chunin exams where not only his skills would be evaluated, but also his intelligence. At some point though, he had found himself in a tight situation that left not only him, but his team in jeopardy of being eliminated from the exams. They had been surrounded by several other Genin from various villages, and after receiving a brutal beating, the unexplained happened as his Sharingan awoken to aid them in the brutal beating. With this new found ability, Xia was able to counter the various Genin around them and rise up to victory against them.

Xiarawst is usually a gentle and kind man, downright good from his heart and cares about the people in his village, meaning if he ever had to give his life to save everyone, he would not hesitate to do so. Recently appointed as Mizukage, he finds himself to be a more understanding person, listening to reason that he deems fit based on requests or ideals. Not a lot can say they truly know what Xia is capable of, or what he is like as he tries to keep others guessing about him.

Xiarawst's appearance consists of his Mizukage robe and hat while underneath he wears his old ANBU uniform, outfitted with black clothing and gray chest armour, ninja sandals with spikes for travelling into mountainous regions, three ninja pouches on their back-waist and a signature spiral tattoo on their shoulder. On his arms are bandages that cover from his wrist up to his forearm with the label Ken(刃) on the wrist. Strapped to his back would be a pair of katanas named Tatsumaki and Okibiitto. 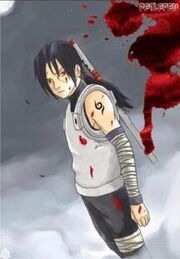