The Y-Nano, or Yliaster Nano is a cube used for a variety of functions such as gathering information and emitting light. It is powered by the user's chakra, although requires very little to operate. It connects to a central database situated in Tenryūji which boasts a considerably powerful wireless signal reach so that all devices can connect to it. With wireless networking in place and the ability to connect to a central repository, it is capable of connecting one Y-Nano to the other to enable long-distanced chat.

The Y-Nano allows for the user to enter inside of it, to be positioned in a virtual dimension where they are able to converse with other Y-Nano owners face-to-face, as well as view visuals of other devices with wireless connectivity to it. As the cube itself is incredibly durable, the user when inside of it is practically unreachable, although they themselves largely incapable of affecting the physical dimension outside. This however possesses excellent reconnaissance uses where the user can manipulate smaller Y-Nano devices to access areas without necessarily worrying about them being harmed in the process, though they all share a central control dimension. While they're believed virtually indestructible, these devices are disconnected from the user (if they're external to the device) when struck by a powerful force, where they will descend to the ground with their light switched off until the user reconnects with it through channeling in chakra.

The Y-Nano can be personalized while inside of it, where upon entering inside of it for the first time a scan will be performed on them to optimize its outer appearance (usually just affecting color), the CPU's automated mannerisms and the virtual interface according to the user's own theme. The virtual interface connects the user directly to the central database, in turn allowing them to download patches for the Y-Nano's core system, as well as applications to further the device's present capabilities. The device is capable of dispersing into smaller cubes in order to produce more visuals for the user to work with, although they don't necessarily deter the device's functionality, as even in smaller states they can expand to roughly the size of a room. Module commands are entered either via the internal keyboard, or thought, depending on the sophistry and functions of the module. For instance, the Y-Nano can be mentally commanded to turn invisible or start recording, whereas to generate a shield a hand must be held out to serve as the epicentre of a triple cube barrier.

As with all wireless network devices, the Y-Nano can be hacked by more advanced users. Y-Nano personally modified by those initially charged with developing them are usually equipped with the most formidable firewalls and error handling protocols. Hackers can forcibly control and enter the cubes of other users that they've hacked into.

A keyboard generated for interface interactivity within the device. 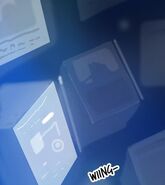 Example applications which can be run adjacently to the main interface.
Add a photo to this gallery

Universally, applications are programs run along the core system to utilize certain capabilities in order to provide added functionality and enhance multiple prospects. In the Y-Nano's case, these applications can either enhance the Y-Nano's logical functions that deal with analyzed data in order to project more meaningful information to the user, such as the core system's temperature, or more usefully in a more combat-oriented context, the capabilities and flaws of analyzed defenses and individuals.

These applications are installed on all devices.

These applications can be downloaded via the app store application, though require special user privileges or an access code to be able to proceed. 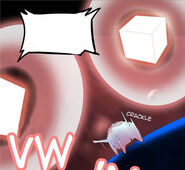 The Y-Nano generating a chakra flow.

A hologram being dispersed. 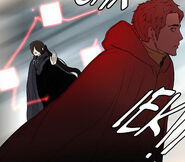 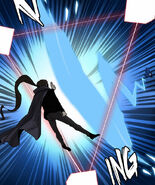 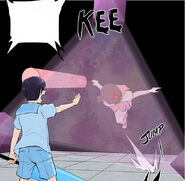 The Restriction Field.
Add a photo to this gallery

Retrieved from "https://narutoprofile.fandom.com/wiki/Y-Nano?oldid=40222"
Community content is available under CC-BY-SA unless otherwise noted.